Our neighbor "The Karl May Festival Elspe".
Vacation for Western fans at the Verse vacation farm

Karl May fans are in good hands on our vacation farm in the Sauerland.
The Elspe Festival is only a quarter of an hour away, a nice walk through the Melbecketal-Rübenkamp nature reserve; you can hardly get any closer to the Karl May Festival.
The Karl May performances are a must for every Western fan, and we have plenty of anecdotes in store for them.
Because we have been good neighbors with the festival for a long time, we like to entertain our guests with exciting stories and interesting facts.

The Wild West in the Sauerland
In the 1950s, classics such as “Wilhelm Tell” were initially on the program on the Elspe natural stage.
Our father, the old farmer Hans Verse, also took on smaller roles here.
Audience numbers fell and the theater club shifted from classic to more popular plays.
Karl May's adventure stories turned out to be a crowd puller, and they quickly became the trademark of the Elspe Festival.
No wonder, because the almost 100 meter wide natural stage with its rocks and natural vegetation offers the ideal setting for action-packed productions with breathtaking stunts and riding scenes.
The stands are now covered, and a whole western town with a saloon, coffee bar and western train has been added.
Horse shows, birds of prey demonstrations and live country music complete the program and invite you to an eventful day in the Wild West.
Events such as concerts and dinner shows in the Elspe Festival Hall round off the year-round program.

Down to earth with Winnetou
For many years, the fried eggs in the Western Saloon came from our hens, because we supplied the Karl May Festival kitchen with fresh eggs from our farm.
We were also involved in company events at the Elspe Festival:
During a covered wagon ride, the guests found a set table in our courtyard with drinks and music.
In the midst of the most beautiful festive mood, our father appeared, played the “bad farmer” very convincingly, who had just returned from vacation, and chased the guests away.
After an adventurous escape in a covered wagon, the company party continued in the saloon.
In the evening our father came into the saloon and that's when most of them noticed that this was being played.
The Winnetou actor Pierre Brice is unforgettable.
We got to know the actor as a friendly neighbor who was interested in agriculture, who did not display any celebrity attitudes.
During the season, Pierre Brice drove past our farm every day.
When we fetched our dairy cows from the pasture to be milked in the afternoon, he sometimes had to wait until the road was clear again.
More than once did the Indian Winnetou become a cowboy, and Pierre Brice helped us drive the cows into the stable.
We like to share these and many other wonderful memories with our guests.
Zum Elspe Festival 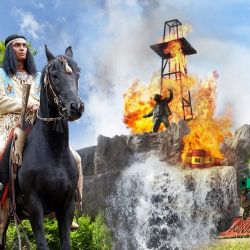 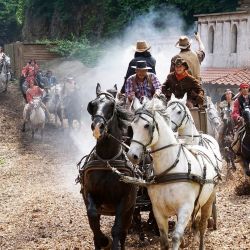 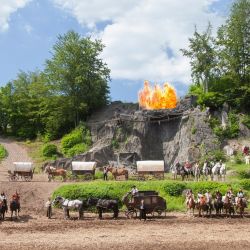